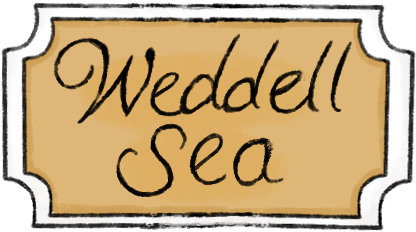 The clearest water of any seas.
The Weddell Sea  is an Antarctic city that is part of the Southern Ocean and contains the Weddell Gyre (circulating ocean current). It also contains many ice bergs and pack ice, and the Ronne Ice shelf fringes the Weddell Sea at winter. At its widest the sea is around 2,000 kilometers across, and its area is around 2.8 million square kilometers, despite its vast size the population isn't quite as large because of the seas undesirable weather patterns.
​
►The sea floor is a brown sediment, with many slopes, hills, and crevices.
►The common species of the area includes fish, invertebrates, many seals, many whales, and a few pods of killer whales.
►Building distribution is very spaced out. There are many self established towns scattered around the area.

The climate is extremely cold, -15° to -20° C during the winter, and 0° to -5° C during the summer. The weather can be quite harsh as there are many windy currents.
FACILITIES
Essential stores, housing, one bar.
Many go to neko harbour or ronne ice shelf to find their needs.