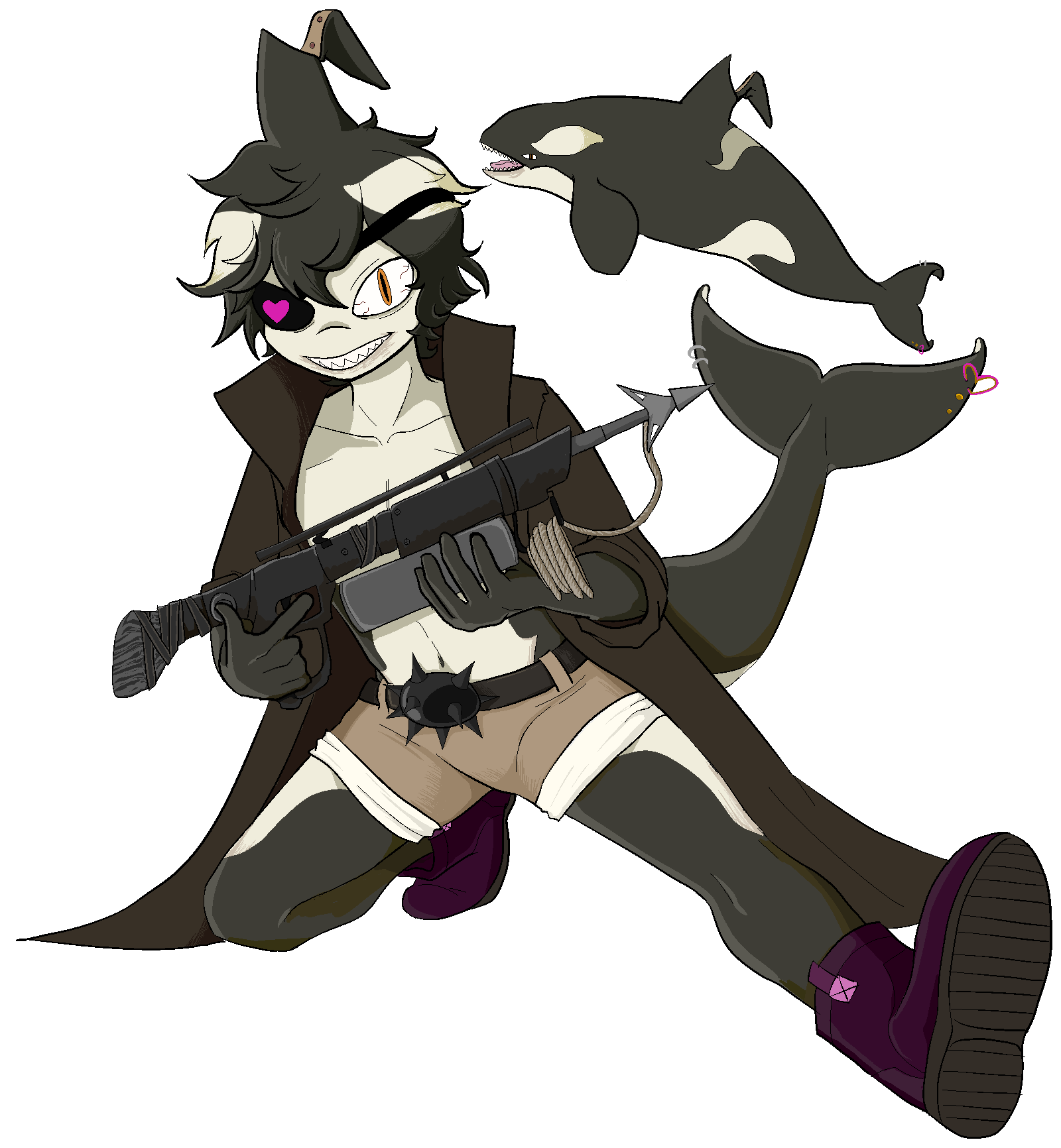 A killer whale who is quite energetic and overbearing. Winck has a strong taste for violence, and he is a hunter that uses a harpoon rifle and other weapons of his choice on his prey. He is very inconsiderate of the feelings of others, and has no qualms about being intruding, nosy, or loud. He has a very vulgar aura, often times his victims can perceive his nasty and homicidal thoughts through his expressions. Even though he has a violent nature and lack of empathy, he is pretty careful about his actions around his family. He tends to annoy his brother though, because they are close.

Winck is vicious when it comes to hunting seals or other whales. He doesn't believe that what he does is wrong, he needs to eat and so does his family, but he is rather too brutal and shows no mercy, so many other animals and even other killer whales despise him.

He has a dense way of talking, and isn't one to be eloquent or gentle with his speech. He uses a lot of foul language whether he's excited or agitated.

He actually doesn't have problems with impulse control, and many of his actions are thoroughly thought out. He does have anger issues and the way he manages his stress. He is also quite intelligent, in the aspect of hunting strategies and knowledge of the world around him. He did struggle with school growing up though, but he always had someone helping him.

It's possible for him to like individuals that can show their ability for dominance or have a strong disposition. If one were to get close to him, they would find that he is not a very committed person and just goes with the flow of his life and likes effortless relationships (family). It's difficult for him to analyze his own emotions, so they will not be hearing any sort of true feelings from him.

Winck was born in Antarctica waters, right before his twin brother Winter. His father is a type B and A orca hybrid and his mother is a Type B that had associated herself with Ronne pod, just like the father's mother. Even though this type B side of the family do not stay in the pod, Winck, Winter, and their father do. They have grown up within close care by the others in the pod because of having a different culture.

Winck's early life is very focused on bonding with his pod. But unfortunately, he became a victim of abuse from his cousin Faith. It may be a reason why his personality is so violent, but he has always been energetic and rowdy ( which consequently caused him to be a target unlike Winter.) Thankfully, he had the support of his brother on his side to get him through that. Their father had been very permissive, especially of Winck's personality, and was not a great role model for them (because of his low confidence and being poor at defending others), though he was very loving. Their mother was only present for their infanthood.

When he was young Winck would get to tag along with Winter's friends too, though unfortunately most of them secretly disliked him. These were the only times he was able to socialize.

Winck's brother Winter has had a direct influence on his life, he was inseparable from him for the longest time. They would always travel together and do activities together, imcluding entertaining themselves with practice hunting. At times, Winck was pretty dependent on Winter and would need help for many things (Like school work, doing errands, and even to defend him when he'd get in trouble.) When the brothers got in typical fights they would end up vehemently ignoring each other, but then makeup in short time.

After some time at the end of their teenage days, Winter started to grow tired of Winck's dependence. He tried to disassociate from his brother, and Winck handled it poorly. In the begining of this he was not so self-aware of his problem, and became very passive aggressive. This continued on with a slew of events until they could come up with a compromise, where Winter had a talk with him over how he has to be able to support himself, find himself some other killer whales to spend his time with, and to not excessively overvalue their relationship. Winck also inputs that he still wants them to be able to hunt and have their strong friendship to continue, and this was reciprocated.

In the time Winck had to spend his days alone in the separation made him adapt to a newer lifestyle, and his behavior has settled down considerably, but he also realized that he doesn't have many friends and wanted Winter to understand his pain with this.

When Winck became an adult It had been decided by his pod that he would be the main food provider, since he had a lot of practice in hunting and has clever tactics. He is not completely burdened with the task though, since his pod has a preference for predating in a group on minke whales (being Type A), but seals are easy to come by for Winck.

There have been times where his victims easily escape from him, which makes him quite angry. Sometimes his prey will fight back, where he will end up with a wound that needs to be tended. He had his dorsal fin sliced by a whale and his right eye stabbed by a leopard seal because of his risky behavior. He is not the only hunter around his town, so he at times will end up just buying meat from his favorite butcher.

Winter (Twin brother): A good brother and friend to Winck. The only person he trusts, the only one he can be himself with and not be reprimanded. He has told many secrets and tales to him. He feels bad that Winter doesn't depend on him the same way though (literally the only thing he has ever felt bad for in his entire life.) Winck at the very least can be a good listener to him which seems to be all he needs.

Toran (Third cousin): Grew up with Winck but never really got along. As kids they would argue a lot, but as they got older some things happened that forced them to respect each others boundaries and to simply be on distant familial terms. Winck wouldn't ever want to mess with Toran again.

Onora Rona (Great grandmother:)Wanted to support Winck in a way that would have alleviated a lot of his childhood problems, but couldn't due to many factors. One of them was because of his reluctance to depend on anyone older than him. Now that Winck is an adult, he tries to get the best meals for her as a way to better his status in the pod. (She is still the matriarch.)

Jaakko: Someone Winck likes to harass. Their budding rivalry is full of competitive encounters, and Winck finds it very entertaining to taunt him.

Redd: He doesn't like him but always falls for his business tactics and ends up giving his money for something he doesn’t need.

Zale: Was once Winck's prey but many years later becomes his brother-in-law thanks to a blossoming of love when Winter first met him. At first, Winck is jealous of him because he thinks he's "stealing" his brother from him. Through character development, he comes to terms with the importance of what his brother wants, which is something he's always supported in other things. At one point he tries really hard to make sure Zale is treating his brother right.

Faith: (Second cousin): Was physically and verbally abusive to Winck when growing up. He strongly dislikes her and usually finds an excuse to leave his residence whenever she comes to visit her pod. Though Faith isn't the same person she was as a child, she has never owned up to anything she has done to him. 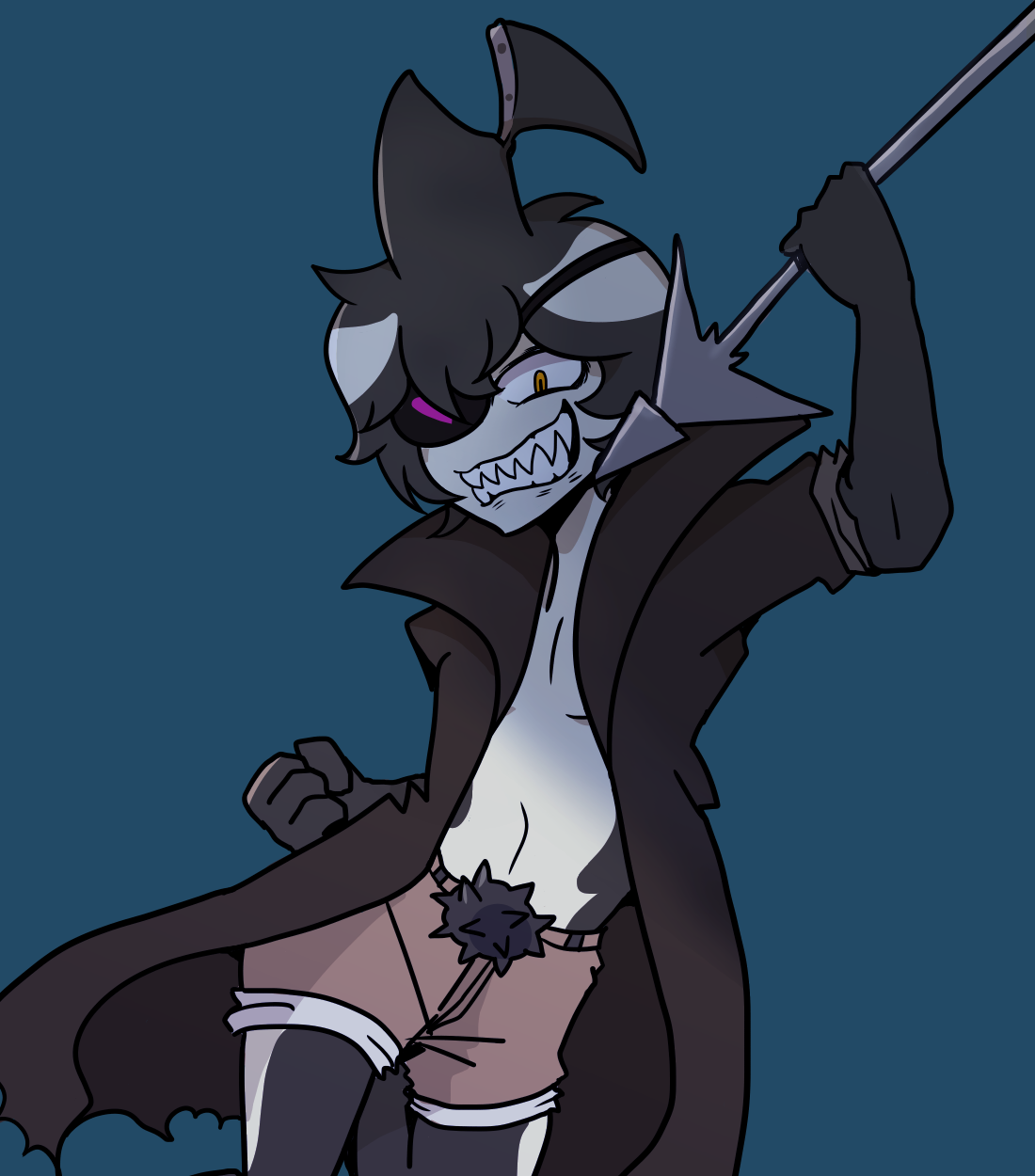